by Dearborn Jewelers of Plymouth MI | Feb 10, 2015 | Careers in the jewelry business, colored gemstones, History of gemstones and the jewelry industry 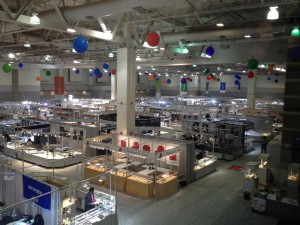 The Life of a Bench Jeweler 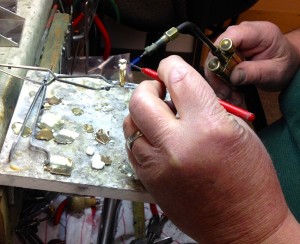 Usually hidden in the back of the store, out of sight and unknown, bench jewelers work their wonders in mysterious ways.  In an attempt to shed insight on the incredible work that they do, let me introduce Nick, the longtime bench jeweler and co-owner of Dearborn Jewelers.  Known for his ability to work miracles with jewelry, he can create beautiful new pieces and repair treasured old ones.  And he does it with a sense of humility and humor.

He started engraving in his father’s jewelry store when he was 14-years old.  He learned a lot about making jewelry from his dad, Nick Pavlich, and from another bench jeweler in his youth, George Omelczenko.  While most of his mastery has been obtained on the job, he did take stone setting classes from the Gemological Institute of America (G.I.A.) back in the early 1990s.

According to Nick, the three most important tools of a bench jeweler are “good eyesight, a hammer, and  inspiration.”

His best advice to young bench jewelers is “Take care of your eyes.” But there’s a lot more to it than having a keen eye.  Nick is a perfectionist and he has the patience to work with the jewelry.  He says he’s not patient when teaching others, but I find him extremely patient with interruptions about whether some repair can be done or whether some design is feasible.

His most memorable job was a lapel pin he made for a gentleman whose last name started with W.  I asked him why it was so memorable and he said, “It just turned out really good.  It was a script W, in white gold, with graduated diamonds mounted in it.  It was really pretty.”   We tried to find a picture of it, but no luck.  So he drew a little picture for me.  It’s amazing how he can remember details of jewelry he worked on, even if it was decades ago.

A bench jeweler’s bench is his domain.  It can look chaotic but he knows where everything is.  If you spend any time around the bench, you’re likely to hear the sounds of hammering, drilling, filing and the occasional “ouch.”  You’ll see the torch fired up, steam coming from the cleaning area, and sometimes you’ll even see Nick down on the ground, searching for that stubborn diamond that simply did not want to be set.  Being a bench jeweler is not easy work.

Most importantly,  Nick is a family man, a religious man, and a man of integrity and honor. You can always count on Nick to tell you the truth and to do his best for you. His sense of duty is one of the main reasons, I think, that Dearborn Jewelers is so successful. Customers know that no one will work harder and with more experience on their jewelry.

So the next time you look at your ring or put on a bracelet, you’ll have a better understanding of the work that went into making it.  Think about the person that made your jewelry–a combination of artist and engineer– the bench jeweler. 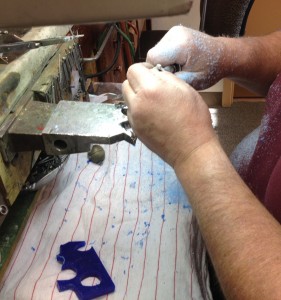