January’s Birthstone–Garnets are Great! Why? 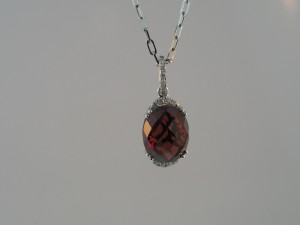 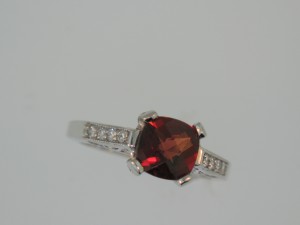 Garnets have a lot to offer those of you born in January or with loved ones born this first month of the year.

One important quality of a garnet is the wide selection of colors it comes in.  Traditionally, the January birthstone has been a deep red color, almost brownish red.  Not everyone likes that brownish hue, although Pantone has named “Marsala” as the 2015 color of the year.  The term, garnet, however, refers to a whole group of minerals with many species and varieties.  If you like a softer red with a purplish hue, try a Rhodolite garnet.  If you want a bright spring green, go for a Tsavorite (sah-vuh-rahyt) garnet.  And, if orange is your color, there’s always a Spessertine (sometimes called Mandarin) garnet.

Another great aspect of garnets is their affordability.  Compared to other birthstones, like April’s diamond, May’s emerald, July’s ruby, or September’s sapphire, garnets are an absolute bargain!  Why is this so? Well, it’s partly because there is an adequate supply that meets demand.  Garnets are mined in many places including Sri Lanka, Madagascar, East Africa, India, China, Australia, Brazil and the U.S.  I also think garnets suffer from a lingering bad reputation they acquired from their common use in Victorian times.  The Bohemian jewelry that was so popular then looks dark and dated to us now.  Over a century later, the deep red garnets are less expensive than other colors of the group.

Finally, for those of you who are concerned about the enhancements done on many fine gemstones–whether it’s heat treatment to improve color or fracture filling to improve clarity–rest assured that garnets come to the market without such common enhancements.  Their color, high refraction, and lack of eye-visible inclusions are all natural.

If you think of gemstones as kids in the classroom, Garnet is the easy-going, good-looking one who never asks for special treatment.  Why wouldn’t you want to make friends with a garnet? Above are some of the pieces we have in stock at Dearborn Jewelers.  If you’re interested in a green, orange, or any other color of garnet, just let us know and we can order it for you.