In 1890 an author named Saxe Holm wrote a charming story entitled, My Tourmaline.  The young heroine possesses a crystal of tourmaline, which she finds in the roots of a large tree.  It brings her good fortune until she loses it.  Bereft until she finally finds it in someone else’s collection, she and her tourmaline are eventually re-united and live “happily ever after.”

What is it about tourmaline that makes people feel so connected to it?  One reason is because of all the colors it comes in.  There is no other mineral that comes in as many hues.  This rainbow quality translates to a lightness and happiness that appeals to all.  It also suggests tolerance, flexibility and a compassionate understanding.  The Sri Lankans named the gem, “turamali”, meaning a stone of mixed colors. 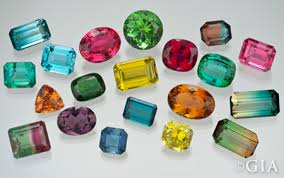 A rainbow of gemstones, all of them are tourmaline.

Another quality of tourmaline is its pyroelectricity.  If heated, it actually has magnetic properties.  As a result, the mineral has many industrial uses.  You can find it in hairdryers to calm static hair, in joint wraps to promote blood circulation, and in tuning circuits for conducting TV and radio frequencies.  In the metaphysical world, tourmaline is seen as a strong protector, reflecting negativity away from anyone possessing the stone.  It’s also seen as a grounding stone that promotes a sense of power and self-confidence.

Finally, tourmaline is a popular gemstone, featured prominently as the birthstone for October and the anniversary stone for the 8th and 38th anniversaries.   It has a hardness of 7 – 7.5 on the Mohs scale, so it’s durable enough to be set in rings.  It’s not as expensive as ruby, emerald, or sapphire, but it can sometimes mimic these colors.  And it’s mined on almost every continent– from the state of Maine to the island of Madagascar.

You may own a tourmaline and not even know it, because the gem has so many trade names.  If you own a rubellite, an indicolite, a verdelite, a siberite, an achroite, or a paraiba, you actually own a tourmaline. You may also have a bi-colored or parti-colored tourmaline, a watermelon tourmaline, or even tourmalinated quartz!  There are so many different looks to this versatile mineral.  If these pictures are motivating you to own a tourmaline (or a second one), stop in our store.  We’d be happy to introduce you to the ones in our showcase. 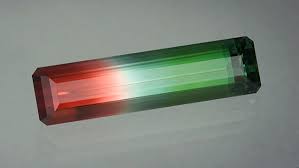 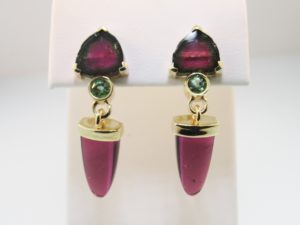 Watermelon tourmaline earrings with rubellite and green tourmaline: custom-made by our benchjewelers 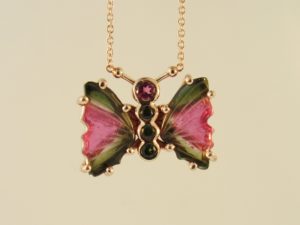 Watermelon tourmaline, carved into butterfly wings, and made into a pendant by our benchjewelers