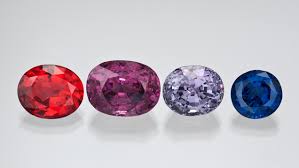 I have some very good news for all of you born in August.  Just recently, the American Gem Trade Association and Jewelers of America announced that SPINEL has been added to the birthstone list as an alternative to peridot.  Not everyone is a fan of peridot’s yellowish-green color, and the gem stone has a narrow range of hue.  Spinel, on the other hand, comes in almost every color of the rainbow!  The most prized color is red.  Pink and blue are two other popular hues.  So, because spinel is a relatively unknown gemstone and because changes to the birthstone list don’t happen often, it seemed important to write about it. 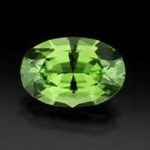 Many people have never heard of spinel.  It was recognized as a separate mineral about 200 years ago, but, until then, red spinel was often mistaken for ruby.  Some famous gems, like the Black Prince’s Ruby, which is set in England’s Imperial State Crown, are actually red spinel.  Those who have heard of it often associate it with something “cheap” or “common.”  Synthetic (aka man-made) spinel has been used for years to make the stones for high school class rings because it’s inexpensive to produce in lots of different colors that mimic birthstones like emerald, ruby, and sapphire.  Synthetic spinel is also used as the top, bottom, or both of a “triplet” that substitutes for a natural gemstone.

Natural spinel is a beautiful mineral made of magnesium, aluminum, and oxygen.  It’s colorless unless a trace element such as chromium, iron, or cobalt makes its way into the recipe.  Chromium leads to a pink or red spinel.  Iron and cobalt lead to violet and blue spinels.  A combination of trace elements produces orange or purple spinels.  These colors need no enhancement, so spinel is rarely heat-treated or irradiated.  It’s a fairly hard gemstone, scoring 8 on the Mohs Scale, and it forms in the cubic crystal system.  These qualities mean that spinel is hard enough to take a good polish and easy enough to cut and facet.  And the gem is usually eye-clean when it comes to inclusions.

Spinel is traditionally associated with Asia–especially Myanmar, Vietnam, and Sri Lanka.  More recently deposits have been found in Tanzania and Madagascar.  Large crystals are quite rare, so the value goes up exponentially, not only for great color but also for size.  While not as expensive as fine ruby or pink sapphire, natural spinel is not an inexpensive gem.  Red spinel would cost approximately 30% of the cost of a similarly sized ruby.  And pink spinel would be about 85% of the cost of a same size pink sapphire.  It’s not easy to find spinel in a jewelry store.  Maybe that will change now that it’s a birthstone, but, up until now, it’s been more of a collector’s stone.

So, take heart all of you who longed for another birthstone! It’s spinel to the rescue!!  Ask your jewelry store for a peek at its spinel.  Here’s a peek at ours. 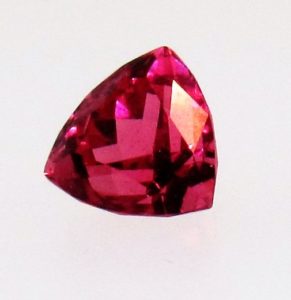