The Story of Campbellite 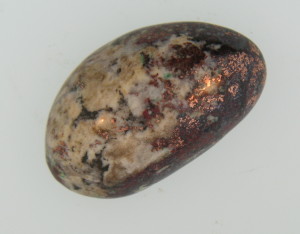 I’ve lived most of my life in Michigan and my maiden name is Campbell.  Most people don’t know that because I’ve been married so long!  But I always thought Campbell was a good name, so I was both happy and surprised to learn that there is a gemstone named after. . .no, not me, nor my kinfolk, but after the Campbell shaft of the well known Bisbee Mine in Southern Arizona.

So, what’s the story of Campbellite?  As explained by one of the stone cutters at Arizona Lapidary, Campbellite is an uncertain  mixture of minerals like cuprite, azurite, malachite, calcite,chrysocolla, pyrite, quartz, and copper.  Its color and look varies because there’s no set amount of these minerals.  It was first discovered by miners looking for copper.  The bosses weren’t interested in this unusual rock, and told the miners to discard it.  But the miners had a different plan.  They saw its beauty.  So, yes, they dumped the Campbellite in the trashcan.  But they separated it carefully from the real trash.  And when no one was looking, they loaded the discarded gem into the back ends of pickups.  Campbellite has been showing up in the market, piece by piece.  There’s not a lot of it–I’m sure plenty WAS dumped.  The mine closed in 1975, and there is no other known source of Campbellite.  But I bought one piece of it, cut into a smooth cabochon, and plan to make a bolo tie for my dad.

I learned a little bit about the mine shaft itself.  It was first developed in 1927, originally as a way to get oxygen to other parts of the Bisbee Mine.  But soon it was one of the best producers of copper ore, with yields of 8-10% copper.

Finally, who is the Campbell shaft named after?  A little research revealed an amazing coincidence.  The shaft was named after Gordon R. Campbell, who actually lived and went to school in Michigan!  He graduated from U of M in 1893 and was a mining executive and lawyer up in the Keweenaw Peninsula.  The Keweenaw Peninsula, jutting from the Upper Peninsula of Michigan, is one of the best known sources of copper world-wide.   Towns like Calumet, Houghton, and Copper Harbor were booming back in the mid-1800s because of copper.  Anyway, Gordon Campbell helped form the Calumet and Arizona Mining Company in 1901, serving as the company’s President from 1921-1931.   It was this company that operated the Bisbee Mine.  So Campbellite WAS named for a Campbell living in Michigan.  Who knows?  Maybe he’s a long, lost cousin? 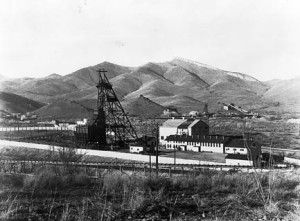 The Campbell shaft, courtesy of the Arizona Historical Society