The History of the Diamond Engagement Ring 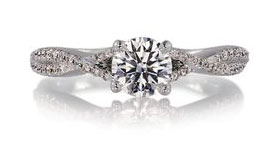 A ring has signified union and commitment for thousands of years.  But when did a diamond become part of the equation?  Prior to 1870, around the time diamonds were discovered in Africa,  diamonds were too rare and expensive for most of us.  They were seen as a symbol of status and wealth, not love and commitment.  There is a well documented case of the Archduke Maximillian of Austria commissioning a diamond engagement ring for his bride, Mary of Burgundy, back in 1477.  But most brides of the time had a simple band.

It was not until the late 1920s that a diamond engagement ring first became popular.  DeBeers, the company that monopolized the diamond market for decades, was eager to market its increasing supply of diamonds to the middle class.  When the U.S. economy faltered in the 1930s, demand for diamond rings fell dramatically.  DeBeers responded with tempting advertisements showing movie stars wearing diamonds.  They tried to educate the public by introducing the 4 C’s. (Color, Cut, Clarity, Carat)  Then, in 1947, their “A Diamond is Forever” campaign launched the idea that giving a diamond when you propose ensures a marriage that will last forever.

By 1965, eighty percent of all new brides had a diamond engagement ring.  At first, most brides sported a solitaire ring, a style popularized by Tiffany and Co.  But in the 1970s more engagement rings had accent diamonds along with a center stone.  Now it’s common to see many diamonds in an engagement ring.  Today’s rings average over 1 carat total weight in diamonds.

What’s next for the engagement ring?   Some say that the trend is to substitute a sapphire (or other colored stone) for the center diamond.  But I have a hard time believing diamonds will ever lose their stature.  Diamonds really are forever.