Famous Diamonds of the World

by Dearborn Jewelers of Plymouth MI | Mar 9, 2015 | diamond jewelry, History of gemstones and the jewelry industry

Diamonds seem to come mostly from Africa or Russia or Canada.  But prior to the 1800s, diamonds came from India.  And Shah Jahan, the same Mogul ruler who commissioned the Taj Mahal, was the owner of some of the world’s largest and most precious diamonds.  He reigned from 1628-1658 and, during his reign he possessed famous diamonds such as the Koh-i-Noor, the Orlov, and the Hope Diamond.  Of course, they may have looked different in the 1600s than they do today.  Diamonds have often disappeared and then disguised by being re-cut.  The famous ones have a colorful past–even if they are colorless. 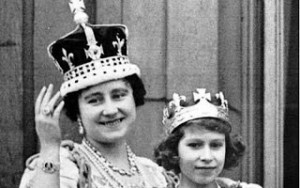 The Koh-i-Noor is in the cross atop the Queen’s crown.

The Koh-i-Noor had many homes before reaching its current resting spot in the Tower of London.  When the Mogul empire was taken over by the Persian, Nadir Shah, in 1739, this diamond and many others were passed to him.  When he was assassinated in 1747, the diamond went to the King of Afghanistan.  Unfortunately, the King had to surrender the diamond to Ranjit Singh, founder of the Sikh Empire, in order to avoid death.  And then Singh had to give up the diamond to the British East India Company, who claimed it for Queen Victoria.

It has been in England ever since 1848.  But it was re-cut during Queen Victoria’s reign and, as a result, lost about 43% of its mass.  Queen Victoria and later Queens of England have worn the diamond in either a necklace, a brooch, or a crown.  The last person to wear the diamond was the Queen Mother, mother of Elizabeth II.  The current queen has never worn it, perhaps because of an ongoing controversy with India over which country should possess the gem.

The Hope has, perhaps, the most colorful history of all.  It actually started out as the Tavernier Blue, owned by a French diamond merchant who obtained the deep-blue diamond from the Mogul Emperor, Shah Jahan.  When the merchant presented the stone to Louis XIV, the French King had to have it.  In 1673, it was recut into a heart, and was thereafter called the French Blue.  Louis XIV wore it in a cravat pin.  It was held by French royalty until the French Revolution, when the Crown Jewels, including the French Blue were put on display to the public in the National Treasury located in Paris.  In 1792, looters stole  the Crown Jewels and the French Blue disappeared.

In 1839, a beautiful deep-blue diamond surfaced, owned by Henry Philip Hope, a prominent London banker.  The stone wasn’t the same heart shape, but it was suspected to be the French Blue in still another re-cut form.  (It was not until 2005, when a computer model study was conducted on the stone, that this suspicion became certainty.)  The Hopes owned the stone until 1901, when it began an 11 year nomadic life, eventually ending up in the hands of American socialite, Evalyn Walsh McLean.   When she died in 1947, Harry Winston bought her entire jewelry collection and, in 1958, he gifted the Hope Diamond to the Smithsonian.  This diamond is one of the most visited exhibits at the museum. 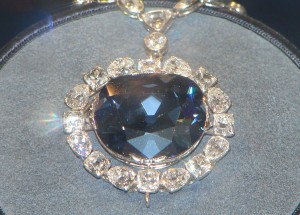 The famous Hope Diamond photographed by Jyothis at Malayalam Wikipedia

It is thought that the Orlov Diamond was once part of a much larger stone, again unearthed during the reign of Shah Jahan.  But, by the mid-1700s, the diamond was possessed by an Armenian diamond dealer called Safras.  Catherine II, Empress of Russia, invited Safras to St. Petersburg, with the intention of buying the diamond.  But the deal was never finalized, and Catherine didn’t get her diamond until her lover, Russian nobleman Grigory Orlov, negotiated a deal with Safras.  Orlov’s name became forever tied to the gem, even though the gem didn’t permanently tie Orlov to Catherine.  Ultimately, the diamond was set into Catherine II’s Scepter, where it remains to this day as part of the permanent display at the Kremlin in Moscow.

Much of my information came from a wonderful exhibit called “Diamonds are Forever: The Incredible Journeys of World-Famous Diamonds and the People Who Owned Them”, showing through April 19th at the Mini Time Machine Museum of Miniatures in Tucson, Arizona.  But there are also many websites and books devoted to these famous diamonds.