Why Start with D? A History of Diamond Grading 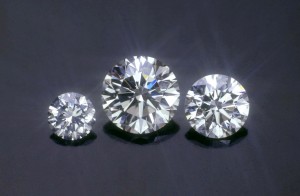 Most couples looking for a diamond engagement ring are already familiar with the color scale for diamonds.  They know that “D” is the “best” if you want a colorless diamond.  It’s just accepted.  But why start with D?  There are historical reasons why color grading doesn’t start at the beginning of the alphabet.  The story is interesting, but basically boils down to the struggle between metaphoric or geographic vs. scientific description.

In the late 1800s, when diamonds and diamond mines were being discovered and dug in Cape Province, South Africa, there was little consistency in the description of diamonds.  Diamond brokers came up with various ways to grade diamonds, using I, II, and III or A, B, and C to indicate quality.  Later, AA and AAA were used to indicate even higher quality than A.  There was a wide range of diamonds that fell into each quality designation, and the grade often depended on who was doing the grading.  There was no set grading system that everyone agreed to follow.   The goal was to sell diamonds, so grade inflation was common.

Some grading terms were even more vague than A, B, and C.  Old world terms for colorless diamonds included “River”, “Finest White”, and “Jager.”  Where do these terms come from?  River was meant to indicate the clear, as water, nature of a colorless diamond.  Jager was a nickname for the Jagersfontein Mine in South Africa, a mine known for the exceptional quality and clarity of its diamonds.  This mine was also known for producing two of the biggest diamonds ever found, the 972 carat Excelsior and the 637 carat Jubilee.

In the 1930s, when the Gemological Institute of America(GIA) was first established, it focused on the science of gemology and the importance of education.  Eager to bring more consistency to diamond grading, the GIA developed its international diamond grading scale in 1953.   It wanted to clearly separate its scale from existing scales.  The GIA started with D so as not to be confused with the A, B, and C grades that already existed in other, less consistent scales.  That’s why the scale starts with D and goes through Z for the normal color range of diamonds.  The GIA scale is much more scientific, with more grades and a set of master stones to represent each color grade.  Skilled graders compare stones to this master set under specific lighting conditions.

The American Gemological Society(AGS) has a numeric as well as letter grading system, with D equal to 0.0, E equal to 0.5, F equal to 1.0 and so on.  Both the GIA and AGS use descriptive words to go along with their grades so, for instance, grades of D, E, and F are described as colorless while grades of S through Z are described as light yellow.  If a diamond is more yellow than the Z master stone, it’s actually a fancy colored diamond and is graded using a different system.

So it was those diamond sellers back in the 1800s that shaped the system we have today.  Even with the unusual starting point, consumers should be grateful for the consistent grading that the GIA and AGS provide.