The general feeling among gemologists and gem merchants is that there is nothing wrong with any type of treatment as long as it’s fully disclosed to the customer, and the customer is being charged appropriately for the treated stone.  As discussed in our last blog, many treatments have stable results.  Enhancements such as bleaching, irradiation, and heating are commonly accepted by most in the jewelry industry because, not only are they permanent but they are also treatments that could have occurred naturally. Some enhancements, however, are not as stable or they lack that “natural” quality. Gemologists and gemstone merchants are wary of gemstones that have been coated or fracture filled. 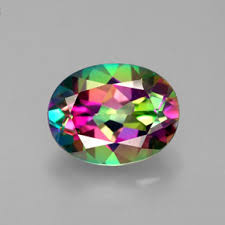 Gemstones have been painted or coated for thousands of years.  It’s not a new idea.  Often the back side (pavillion) or girdle of a faceted gemstone is coated with a thin film of metal oxide paint.  The well-known Mystic Topaz is actually colorless topaz with a thin layer of titanium on its pavillion.  The coating causes interference with light and leads to Mystic’s rainbow of colors.  Drusy quartz is another gem that can get coated with permanent metallic film, using a process called vapor deposition.   Both of these processes are permanent as long as the gems aren’t exposed to high heat or chemicals.

If a gem such as emerald  has tiny fractures or cavities that reach the surface of the stone, apparent clarity of the gem can be improved by filling the fractures with either oil or wax.  Even diamonds or rubies can be fracture filled, although the filling is generally lead glass rather than oil.   Glass fillings are more durable than oils or waxes.  High heat, acids, or even vigorous cleaning in an ultrasonic cleaner can drain the emerald of its oil.  New oil can be inserted but, until it is, the emerald will look like it has more inclusions than it had before.  Many gemologists worry more about fracture filled diamonds.  Emeralds have been oiled for centuries and bench jewelers know the special care that they need.  But diamonds normally handle the heat of the jeweler’s torch.  A fracture-filled diamond, however, cannot handle heat, and must be treated differently than a non-treated diamond.

This concludes our three-blog series on gemstones and their treatments.  I guess the thought I want to leave you with is, if you’re buying nice gemstones, ask questions.  Especially if you decide to buy off the internet, look at the fine print.  Fracture-filled diamonds are a “fraction” of the cost, but they require special care and will never be as valuable as a diamond that’s not fracture-filled.  Know what you’re buying.