The romance and history of colored gemstones has always fascinated me.  I guess I’m just a sucker for a good story.  Here are three I thought you might like.

TANZANITE:  It’s said that we are all members of the “Tanzanite generation.”  Discovered in 1967 by a Masai tribesman in Northern Tanzania, Tanzanite is mined in only one, 4 square kilometer, location.  And the mines are getting deeper and harder to mine profitably.   We will be the ones who can buy a new Tanzanite.  Future generations will only see the stone in heirloom pieces.  It’s estimated that Tanzanite One, the largest Tanzanite mining company, has less than 30 years of production left.

The gemstone was named by Henry Platt, great-grandson of the famous Louis C. Tiffany.  Tiffany and Co. realized the importance of the gemstone and quickly made themselves the main distributor.  Their marketing efforts made tanzanite one of the most popular gemstones by the 1990s.  The beautiful gem hit the big screen with a “splash” as the Heart of the Ocean in the movie, Titanic.

MORGANITE: This pink to orange/pink variety of beryl was originally discovered in Pala, California in the early 1900s.  It was named for J.P. Morgan, a great financier and collector of minerals.  Tiffany’s gem buyer and gemologist, George Kunz, was the man who named the gem, buying up all he could find for his wealthy client.  Incidentally, another pink gemstone, discovered at about the same time, was named Kunzite in honor of George Kunz.  So, he got his own gemstone, too!

Morganite is the same species of mineral as Emerald and Aquamarine.  Like Aquamarine, it is usually an eye-clean stone that can be cut in larger sizes.  It’s a good thing, too, because a larger stone usually shows a more saturated color.  Pale Morganite often needs that advantage.   It’s generally heat-treated to improve its pink color and minimize its yellowish tint.  The treatment is stable, so no fading occurs. 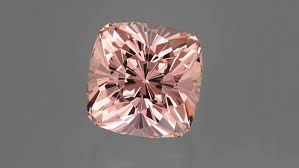 ALEXANDRITE: First discovered in Russia’s Ural Mountains in the early 1830s,  Alexandrite is the quintessential color-change gemstone.  It was found by miners who thought they’d found emeralds, until nighttime came and they were sitting around the campfire.  Alexandrite’s trace elements of iron, titanium, and chromium make it greenish in sunlight and reddish in incandescent or fire light.  Boy, were those miners surprised when, the next morning, their red gemstones had turned back to green!

Legend says that the gem was found on the 16th birthday of young Alexander II, future Czar of Russia.  The stone became the National Gem of Czarist Russia.  It was the perfect fit with the red and green color scheme of imperial Russia’s military.  Every Russian had to have an Alexandrite.  Unfortunately, for all of us, the Russian supply was depleted.  Fortunately, other deposits have been found in Sri Lanka, East Africa, and Brazil.

Natural Alexandrites are very expensive, especially in larger sizes.  Even the synthetic version is expensive, because it’s difficult to manufacture.  But, if you’re lucky enough to own an Alexandrite, you have an “Emerald by day, and a Ruby by night.”