The History and Origins and Stories of Turquoise 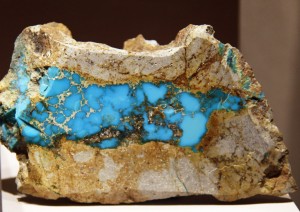 Almost everyone has heard of Turquoise.  It is one of the oldest, most popular gem stones of all time.  Turquoise has a rich and colorful history, and it originates in a few places around the globe.  Studying turquoise is like taking a journey around the world and back in time.  Sounds fun, right?

Imagine yourself in the time of King Tut, in Egypt, around 1330BC.  Thousands of laborers worked the mines in the Sinai Peninsula, finding turquoise for the pharaohs.  When King Tut’s treasures were discovered, they included pieces of beautiful blue turquoise.  Although the mines in the Sinai had long been forgotten and depleted, when they were re-discovered in the mid-1800s, people did try to work them.

In the 12th and 13th centuries AD, on the other side of the world, in the land of the Native Americans, turquoise was mined for the Aztec Kings.  It was used for pendants, beads, and for trade.  Proof exists that the prehistoric peoples of the Anasazi and Hohokam tribes mined turquoise in areas we call the Southwest, and traded it to people who carried it hundreds of miles from its origin.

The robin’s egg blue of “Persian turquoise” was treasured by the peoples of Persia (now Iran), Afghanistan, Siberia, and Turkistan (now Turkey).   Turquoise was found in ancient graves dating from the first to third century AD.  And it was from this area that turquoise first made its way to Europe in the late 1600s.  Because it traveled through the land named by the French as Turquie, many believe that the stone got its name by Frenchmen who thought Turquie was its origin.

China’s love of turquoise dates back to the thirteenth century AD.  There it was used mostly for carving and decorative items.   In Tibet, the stone was used for currency and as an amulet.  Although there were a few mines in China, most of their source came from Persia, Tibet, and Turkey.

Now that we’ve traveled around the world, let’s focus on our own backyard–the Southwestern states of Nevada, Arizona, and New Mexico.  There are many mines in each of these states and turquoise lovers know the origins of their stones.

The Ajax Mine, a relatively new mine, yields stones ranging from light blue with dark blue veins to dark green with light blue areas. The Blue Diamond Mine, inaccessible in the winter months, produces light to deep blue turquoise exhibiting swirling or mottled patterns of light and dark blues.  Carico Lake Mine resides on a dried up lake bed, and its turquoise is a clean spring green color with black spider web matrix.

Bisbee, Arizona is the site of the Bisbee Mine, closed since the early 1970s, but known for the intense blue color of its turquoise and the fine webbing of its dark matrix.  The Kingman Mine is one of largest domestic turquoise mines.  Its turquoise ranges from light to dark blue with some tints of green.  Its matrix can range from white, light brown to black and it’s frequently flecked with pyrite or quartz.  The Sleeping Beauty Mine produces a soft blue, like a robin’s egg blue, turquoise, with little or no matrix.

The Cerrillos Mine, 10 miles south of Santa Fe, is the oldest known source of turquoise in America.  The huge deposit was originally exposed at the surface but has now been mined more than 200 feet deep. The turquoise that comes from Cerrillos varies in color from tan and khaki green to blue-green, blue, and even white.

My own story of turquoise starts in Tucson, Arizona at the 2015 Gem Show.  Wanting to buy a piece of turquoise, I came upon Helen Shull, owner of Out of Our Mines, in Nevada.  She told me that the piece of turquoise I selected came from a new mine called the Candelaria Pickhandle Mine.  The interesting name comes from the fact that an old pickhandle, left by a miner decades ago, sent the signal that turquoise was present.  Helen and her husband, out walking their land in Nevada, found this old, long forgotten pickhandle and began to mine the area.  My piece is beautiful, blue with golden matrix. 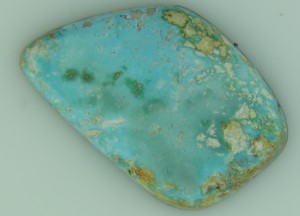 My favorite story of turquoise came from the Native Americans who saw the blue stone as giving of life and good fortune.  One of their legends says that people danced and rejoiced when the rains came, and their tears of joy mixed with the rain and seeped into Mother Earth.  That mixture became the “fallen sky stone”–Turquoise.

Much of my information for this blog came from http://www.traderoots.com/Turquoise_About.html, if you want to know more about this magical stone.