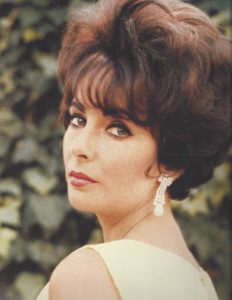 A few months back I wrote about Elizabeth Taylor’s Jewelry, based on her book, My Love Affair With Jewelry.  Little did I know that the blog would spark so much interest, both in me and in others.  After more research and a presentation at our store, I feel empowered to add to the topic.

Elizabeth Taylor was always a lady, always “put together.” These were the words of a friend of hers who I was fortunate to speak with.  She wore jewelry appropriate to the occasion.  She owned big, dripping, diamond, emerald, and ruby jewelry which she wore on the ‘red carpets.’  But she also owned more modest pieces like strings of beads and charm bracelets.  According to her friend, she never left her room without jewelry adorning her outfit, but she made sure the jewelry fit the occasion.

She obviously loved receiving gifts of jewelry, but she was always willing to share her pieces with the world.  She didn’t lock them away.  As she said in her book, “When I wear it anyone can look at it, and I’ll let anyone try it on.”  For all that she owned, I’m not convinced she was materialistic.  I think she cared most about people.  She related to people and had many friends.  The people who knew and loved her most understood that the receiving of gifts was her top ‘Love Language.’  Malcolm Forbes once gave her a suite of paper jewelry that she treasured. A gift was an expression of love, and that was most important to her. 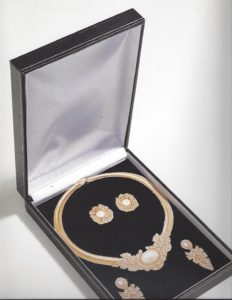 Elizabeth always knew that, when she died, most of her jewelry would be auctioned off to the highest bidder.  Her collection would not remain intact.  She hoped that the new owners would love the pieces as much as she did, and that they’d see themselves as caretakers.  “Nobody owns anything this beautiful.  We are only the guardians,” she said.

In December, 2011, nine months after Elizabeth died, her jewelry did indeed get auctioned by Christie’s, both in a live auction at New York’s Rockefeller Center and also through an on-line auction.  The live auction was the most valuable jewelry auction in history, raising almost $116 million.  I spoke with someone who went to the auction.  She and her husband had hoped to purchase some of Elizabeth Taylor’s jewelry for their store, just for promotional purposes.  But the pieces were fetching two, three, and up to ten times the auction estimate.  They ended up buying the paper jewelry, and even that sold for $6,875!

The on-line auction had over 950 items–jewelry, clothing, accessories, and decorative arts–that sold over the extended period of December 3rd – 17th.  Altogether the auctions raised over 150 million dollars for the Elizabeth Taylor Trust and its beneficiaries. The Trust completely funds the operating costs of the Elizabeth Taylor AIDS Foundation.

One controversy regarding the auction casts a shadow over its success.  In May, 2017, the Elizabeth Taylor Trust filed suit against Christie’s for misrepresenting one of Ms. Taylor’s most iconic diamonds, the Taj Mahal.  In 2012, the buyer of the diamond claimed that he was led to believe the diamond was once owned by Shah Jahan, the emperor who built the Taj Mahal.  He wanted his $8 million back when he learned there was no proof the Shah had ever owned it.  Christie’s refunded his money, but the Trustees felt that Christie’s action was inappropriate.  The trustees never portrayed the diamond as something that had belonged to the Shah, and they were upset that the best opportunity to sell the diamond was gone because of miscommunication.  As it stands right now, Christie’s possesses the diamond and the Trustees have the cash.  After years of trying to resolve the controversy through mediation, the decision was made to go through the courts.  It sound like a terrible mess which will probably take years to untangle.

Elizabeth Taylor lived a complicated life.  She was often misunderstood.  It makes sense that, even after she’s gone, there’s some untangling to be done.  But I hope you agree with me that learning more about this fascinating celebrity is worth the effort. 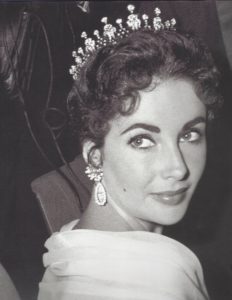