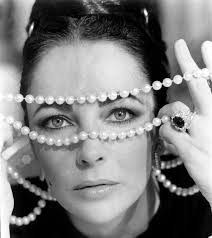 One of our favorite clients recently lent us his copy of Elizabeth Taylor, My Love Affair With Jewelry. Published by Simon and Schuster in 2002, the book contains 280 illustrations of her jewelry.  Even better, the text contains many of her personal stories about the jewelry.  She was a knowledgeable collector, and both her passion for and knowledge of jewelry shine through in these stories.  She saw herself as the custodian of her pieces–“here to enjoy them, to give them the best treatment in the world, to watch after their safety, and to love them.”  She understood that, in the future, other people would have them, and she hoped that they would cherish the jewelry and respect it.  As she said, “. . .this kind of beauty is so rare and should be treated with such care and admiration.”

The first story she told was one of the best!  She always loved pretty things and, because her dad owned an art gallery in the Beverly Hills Hotel, she was a frequent visitor.  There was also a boutique in the hotel, and it was there that she saw the perfect pin for her mother.  It was pretty expensive–about $25.  That’s a lot of money for a twelve-year-old who earns 50 cents a week!  But she saved for it and eventually was able to give it to her mom for Mother’s Day.  It was one of her mom’s most valued possessions. 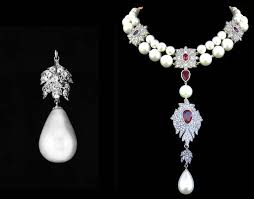 La Peregrina, before and after re-mount

Another favorite story for me was her mishap with a most famous pearl, La Peregrina.  Mary Tudor of England wore this natural, teardrop pearl way back in the 1500s and, over the centuries, many other queens wore it, but in 1969 Richard Burton bought it for his wife, Elizabeth Taylor.  Soon after it was purchased, she was wearing the pearl on a delicate chain around her neck, when she reached down to find it missing!  Fortunately, she was in her suite at Caesar’s Palace, so she knew it had to be in one of the rooms.  Carefully, she started looking for it, trying not to arouse suspicion in her husband. She walked back and forth across the thick carpet in her bare feet, praying to feel the pearl below.  All of a sudden, she saw one of her dogs chewing on, what appeared to be, a bone.  In a flash, she opened the puppy’s mouth and found La Peregrina!  Amazingly, it was not scratched.  “I did finally tell Richard,” she said.  “But I had to wait at least a week!” 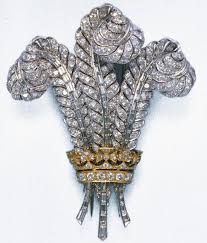 The Welsh Pin, once owned by the Duchess of Windsor, Wallis Simpson

Elizabeth Taylor became friends with many famous people during her life.  Two of them were the Duke and Duchess of Windsor.  The Duchess wore this Welsh Pin whenever she saw Elizabeth, because Elizabeth liked it so much.  It was actually a royal pin that the Duke had received when he was Prince of Wales.  When the Duchess’s estate went to auction in 1987, the pin was the item Elizabeth just had to bid on. She felt that the Duchess wanted her to have it. And she knew that the proceeds were going to a cause she believed deeply in–AIDS research.  She was one of two big bidders, but she made the last bid, for $623,000.

If you ever have the chance to read this book, I would highly recommend it.  It was filled with stories that helped me understand the personality of Elizabeth Taylor.  And the pictures of the jewelry were amazing!   I’ll close with a quote of Elizabeth’s that, I think, shows something of her true character. “If you’re a collector, I think you’ve got to be willing to share.  Some people lock their passions up in vaults, behind dark doors, so it’s only theirs.  I don’t understand that mentality at all.  Each piece is different, each piece is unique.  And they each call out, ‘Look at me, look at me.’ I do, however, have a safe!” 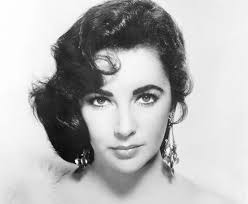