Living Coral: The Gem Behind the Color 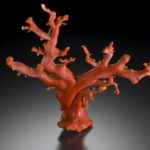 This year’s Pantone Color of the Year is Living Coral, and it started me thinking about the organic gem that the color is named for.  Coral has been used in jewelry for thousands of years.  First century Romans used it to ward off evil and impart wisdom.  Their children wore branches of the stuff around their necks to keep them safe.  Coral was extremely popular in jewelry made during the Victorian Age.  Again, it was seen as good luck to wear it, as it would keep away evil spirits. Lately, coral jewelry, especially vintage and antique jewelry, has seen an upsurge in value.  At a recent Sotheby’s auction, the beautiful coral brooch below sold for $27,500. 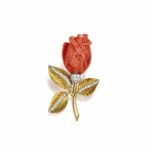 Coral, Gold, Platinum, and Diamond Brooch from Cartier, circa 1955

Part of the reason for the increased value may be the decreased supply.  Coral is harvested from tropical or subtropical oceans.  It takes thousands of years for the tiny marine animals, called coral polyps, to build the branch-like structures.  Made mostly of calcium carbonate, the structures survive long after the little animals that built them.  But years of over-harvesting, combined with rising ocean temperatures and sea levels, have depleted the supply.  The Mediterranean Sea used to be the main source of coral, but not anymore.  Waters off the coasts of Australia, Japan, Malaysia, the Philippines, Taiwan, the Midway Islands, and the Canary Islands are major sources of coral today, but many have strict government regulations on the amounts of coral that can be harvested. The state of Hawaii protects its black “King’s” coral as an endangered species.

Coral is usually associated with a warm reddish-pink color.  But gem quality coral comes in many colors–white, cream, pink, orange, red, dark brown, gold, and black.  Coral can even be blue, purple, or lavender!  The most common color is white, but the most prized color is red.  The coral used in jewelry is not usually dyed, but it doesn’t hurt to ask, especially if the coral is a deep red.  The Gem Coral pendant we have in the store is a custom design in 14 karat gold.  The coral is cream and brown. The accent stones are green and white diamonds. It’s such a unique piece made here at Dearborn Jewelers. 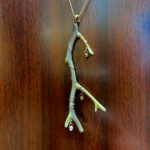 Custom made at Dearborn Jewelers

Pantone describes its newest color of the year, Living Coral, as “vibrant yet mellow.”  It personifies the color with adjectives like “sociable”, “spirited”, and “nourishing.”  I would agree with them that Living Coral, both the color AND the gem, embody our “desire for playful expression.”  Wearing a piece of jewelry made with coral just makes you feel good.  It’s bright, it’s fun, and it’s approachable.  It reminds you of Spring! 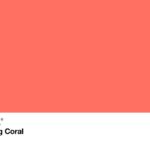