A Crater of Diamonds 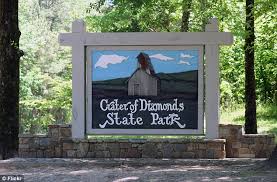 Have you ever heard of Crater of Diamonds State Park in Arkansas?  The place where you can sift through the dirt and look for the sparkle of a diamond?  I so wish my parents had taken me here when I was a kid!!  Even though the possibility of finding a diamond is small–only about 1-2% of all visitors leave with one–the probability of having a good time is very high.

Crater of Diamonds has been a state park since the early 1970s.  The park encompasses over 900 acres, but 37 of those acres sit on a volcanic pipe.  This pipe, which was part of a 95 million year old volcano (long since eroded), carried diamonds to the Earth’s surface.  Today, Crater of Diamonds is the only diamond-bearing site that is open to the public.  For eight dollars you can search from morning til night.  The park has exhibits and videos that give you the history of the area as well as good tips on how to search for diamonds.  It has equipment you can rent, things like shovels and sifting screens, or you can bring your own.  Over the years the park has been the location for some remarkable stories. 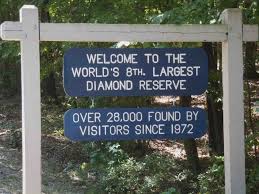 The biggest diamond ever found there, or anywhere in the U.S., was a 40.23 carat stone called Uncle Sam.  It was found back in 1924, when the area was still owned by a diamond mine.  Other big finds have been made over the years.  As recently as 2015, an 8.52 carat diamond was found, and has been named Esperanza.  Most of the diamonds found, however, are small.  Approximately 90% of the diamonds are less than 1/4 carat, which is only about the size of a match head . The diamonds from this site are yellow, brown, or colorless.  They are not easy to find, but one feature that helps is that they look polished, almost as if they have an oily film on them.  Also, they’re usually translucent, which means you can see into them but you can’t see through them.  If you’re not sure what you’ve found, there is an expert at the site, ready to help you with identification. 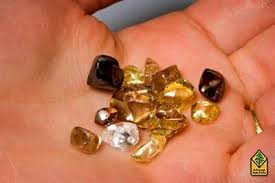 The park is a popular place.  It had 168,000 visitors last year.  In addition to looking for diamonds, there is a water park and camping.  It sounds like the place for a perfect day, if you’re a kid.  Go get dusty and dirty looking for rocks, and then get cooled and cleaned off at the water park!  Heck, it sounds great even if you’re not a kid!! 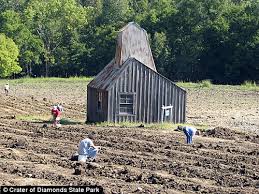 If you’d rather look for colored gems, amethysts, garnets, and agates have also been found at Crater of Diamonds.  But there are, perhaps, better locations in the U.S. if you’re rockhounding for colored gemstones.  Check out Gem Mountain in Montana for sapphires.  Or Emerald Hollow Mine in North Carolina for emeralds, rubies, and aquamarine.  Morefield Mine in Virginia is a source for amazonite, beryl, garnet, amethyst, and topaz.

It’s not too early to start planning next summer’s vacation.  Ask your kids and they’ll tell you–“We want to dig for gemstones!”