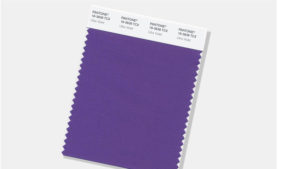 SUGILITE was first identified in 1944 by  Ken-ichi Sugi from Japan.  But gem quality Sugilite wasn’t discovered until 1979 in South Africa, making it a very new gem in the jewelry industry.  The color ranges from a pinkish purple to a deep bluish-purple.  The hardness is between 5.5-6.5 on the Mohs scale.  Sugilite is generally cut as a cabochon because it’s opaque.  It usually has veining and a mottled appearance.

CHAROITE is another “young” stone.  Named after the Chara River in Eastern Siberia, the only place it’s ever been found, it was discovered in the 1940s but not really known until 1978.  The stone ranges from lavender to purple in color, is usually opaque, and is readily identified by its swirling, fibrous appearance.  Considered a rock rather than a mineral, its hardness on the Mohs scale is listed as 5 – 6. 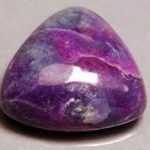 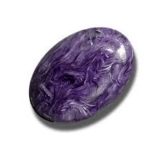 JADEITE has been known and valued for centuries.  It comes in many colors, not just green.  Lavender jade is beautiful!  It can be semitransparent to opaque and is usually cut into cabochons or beads.  It comes from many different places–Myanmar, New Zealand, Russia, and Canada to name a few.  Jade is a harder, tougher stone than either Sugilite or Charoite.  But it also has the possibility of being dyed, which brings down the value.  Neither Sugilite nor Charoite undergo treatments.  Always ask if the jadeite has been treated or enhanced before you buy!

PURPLE SAPPHIRE is very rare, coming usually from Sri Lanka or Madagascar.  Again, sapphire has been valued as a gemstone for centuries, but most people don’t know that it comes in so many different colors.  Most sapphire is heat-treated, but purple, lavender, and violet sapphires usually don’t need to be.  Purple sapphire has a Mohs hardness of 9, so it’s the most durable of the options presented here.  Because it’s hard and transparent, this gem is usually faceted.  Not surprisingly,  it’s also the most expensive option listed. 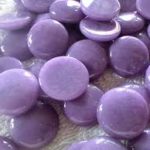 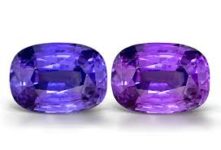 Amethyst and Tanzanite are lovely purple gems, and they would work well with this year’s fashions.  But now you have LOTS of options if you want to be “styling” with the Color of the Year!