Made in Michigan Jewelry

Michigan isn’t known as a state rich in gemstones.  We have Petoskey (our state stone) and Isle Royale Greenstone (our state gem).  There are no sapphires, emeralds, or rubies, but this hasn’t stopped us from making our own gems.  Be thankful for the ingenuity of artists who use the materials readily available to them.  If you’re a Michigander, you can be proud of our “Made in Michigan” gems.

Detroit is the Motor City.  Henry Ford started making automobiles around the turn of the 20th century.  Little did he know he’d be helping the jewelry industry!  But Fordite, or “Motor Agate” as it’s sometimes called, is made from the same kind of lacquer or enamel paint that graced the cars of the mid-1900s. Today the material is used to make such things as pendants, earrings, and cuff links. 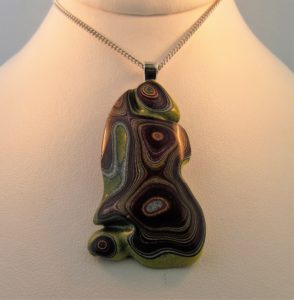 Fordite Pendant made from Cadillac Paint

For decades, automobiles were spray painted by hand in rooms called painting bays. The painted car frames sat on skids that could then be moved to the oven when the paint was ready for curing.  Over time, excess paint on the skids, baked hard by many trips to the oven, made the skids less efficient.  Workers would chip big chunks of psychedelic enamel off, and, at some point, they realized that the colorful chunks could be cut and polished.

According to experts on the material, the heyday for Fordite was in the 1970s, because such a variety of color was offered.  Experts can look at a piece of Fordite and know, approximately, when the piece was formed. For example, bright colors of red, green and yellow were popular in the 1960s.  Earthtones of olive green and brown were popular in the 1970s.  Experts can also distinguish Fordite from the creations of contemporary jewelers who can make their own “Fordite-like” pieces.  Obviously, the “natural Fordite” is more valuable.

By the late 1980s, innovation in the painting process reduced the amount of wasted paint.  Today’s cars are painted with robotic arms and a magnetic process which eliminates the chance of overspray.  Sadly, colorful Fordite is no longer made.  If you want to own a piece of Fordite, don’t wait too long!

Fordite isn’t the only example of recycling in jewelry.  In the town of Leland, near Traverse City, jewelry is made from the slag by-product of an iron smelting process.  Back in the late 1800s, Leland was home to the Leland Lake Superior Iron Company.  Situated close to the harbor, right on Lake Michigan, the company separated iron from the raw ore.  The glass-like slag, made of silicon dioxide and metal oxide, had useful purposes when the company was in business, but when it folded in 1885, heaps of unneeded slag were dumped into the harbor.  Within a few years green, blue, gray, and even purple pieces of the slag were coming up on shore like beach stones.  Snorkelers find larger chunks of the slag further out in the harbor.  No one seems to know who first decided that the material could be shaped and polished for jewelry, but it’s been used for at least 30 years. Today, almost any jewelry store in the Leelanau Peninsula has jewelry made from Leland Blue.

Let me mention one final example of recycled material in jewelry. A young company, Rebel Nell, figured out how to use another of the Motor City’s commodities. They make sterling silver jewelry from peeling and fallen graffiti paint. The process Rebel Nell uses to stabilize the paint is a trade secret, but it’s no secret that they are doing great work. The mission of the company is to employ, educate, and empower disadvantaged women living in local shelters.  The work they do, making bracelets, rings, pendants, and earrings, allows the women to transition to an independent life. 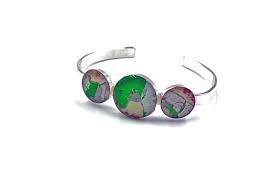 Recycling is a strategy that only grows in popularity.  Michigan jewelers take slag, paint, and other things that have little value (think beach glass and copper nuggets) and make new treasures from them.  It’s the Michigander way!