A Bracelet Made of Shells

The state of Hawaii is composed of many islands, seven of which are inhabited.  I have to admit that, until I got to visit the state this past January, I would not have been able to name those islands–O’ahu, Maui, Hawaii, Kauai, Lanai, Molokoi, and Ni’ihau.  Most people know about O’ahu.  How many have heard of Ni’ihau?  With a population of about 160, it is a well kept secret and deserving of the name, the Forbidden Island.

Ni’ihau has been a privately owned island since 1864, when Elizabeth Sinclair bought it from King Kamehameha IV for $10,000 in gold.  Her great-great grandsons, Bruce and David Robinson, own the 70 square mile island now, and they have kept the island isolated and pristine.  The families that live on the island today are descendants of the original families that lived there in the 1800s.  The people have their own dialect of the Hawaiian language.  They live a lot like their forebears.  This is one place where not much has changed.

The people of Ni’ihau are well known for the beautiful shell leis they create.  Families have unique patterns that they use in their jewelry.  Artists use the tiny shells that wash up on the beach, including the highly sought after Kahelelani shell.  The sale of these leis, bracelets, and earrings is a major source of income for the Ni’ihau people.  Prices are determined by the rarity and quality of the shells as well as the skill of the artisan.  When I was on Maui, I bought a beautiful bracelet that came with its own certificate of authenticity.  I was told that, in the past, there were “copy-cats” who undersold the true artists.  So the certificate is important.  Be wary of shell jewelry that seems poorly made or is extremely inexpensive. 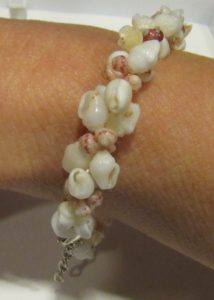 My shell bracelet from Ni’ihau.

If you are planning to go to Hawaii, I would encourage you to learn about the history of Hawaii.  It’s loaded with interesting characters like Captain Cook (not Hook), Queen Emma (wife of King Kamehameha IV),  and even Elizabeth Sinclair (an amazing pioneer from Scotland, who ended up owning an island!)   I loved learning about all the King Kamehamehas (there were five of them) and their wives.  Two royal women,  Queen Kapiolani and Princess Lili’uokalani, can be credited with popularizing shell jewelry.  They traveled to England for Queen Victoria’s Golden Jubilee in 1887, where they wore their long leis and made quite the splash! 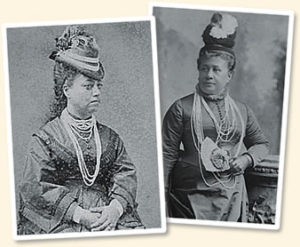