The Latest Trend: the Two-Stone Ring

Maybe you’ve seen the ads on TV.  A laughing couple in a car, sharing a private moment as they drive a country road.  They are in love.  But they’re also best friends.  And that’s the story of the two-stone engagement ring.  It represents the dual nature of their relationship. 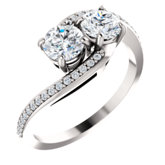 The two-stone ring is the latest in a fairly long line of styles promoted by De Beers, the diamond company that, for most of the last century, was the biggest supplier of uncut diamonds.  Their ability to create demand for diamonds started with the famous phrase from the 1940s–A Diamond is Forever.  And it worked so well that Ad Age, a magazine that analyzes and reports on the marketing world, named it the number one slogan of the 20th century.

A decade ago, it was all about the three-stone engagement ring, or, as it was sometimes called, the trinity ring.  The three stones signify your relationship’s past, present, and future.  Or the trio can be seen as signifying friendship, love, and fidelity.   The most common version of this ring had smaller stones on the left and right with a larger stone in the middle. 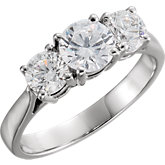 Also around ten years ago, the journey necklace was advertised widely as a sentimental way to think about your journey together with the person you love.  Their were several styles, for example the ladder, circle, heart, or S, but most had five or seven diamonds. 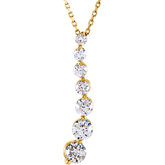 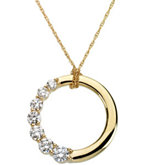 Other pieces De Beers promoted were the diamond tennis bracelet (1988), the bezel-set diamond solitaire necklace (1998), and the right-hand ring (2003).  I laughed when I saw the date on the bezel-set necklace.  My husband bought me my necklace in 1999.  It’s funny because I’ve never thought of advertising as being influential on my husband or myself.  We don’t watch much TV and we hardly ever pay attention to commercials, except for the Superbowl ads.  But good advertising does work, and the company that advertises for De Beers is very, very good at it.

And their goal is obvious.  They want you to buy more diamonds and especially smaller diamonds.  Why smaller?  Because there are many, many more small diamonds than large.  That’s also the reason why buying a carat’s worth of small diamonds is much less expensive than buying a single, one carat stone.  As a quick test, I looked at one diamond vendor’s pricing on one carat, one-half carat, and one-third carat stones.  The pricing follows a more exponential pattern.  Keeping the other variables of cut, color, and clarity stable, a 1/3-carat stone was about $1000, a 1/2- carat was $3000, and a 1-carat was around $9000.  A three-stone or two-stone ring, by carat weight, can be quite cost effective.

The point of my blog is this:  Buy a style of ring you love rather than the style that is being promoted at the moment.  Don’t get swayed by the sentimentality of the story.  Your ring should represent what you want it to represent–not some story made up by someone in advertising.