There are four green sand beaches on Earth.  One of them, Papakolea Beach, is at the southern tip of the Big Island of Hawaii.  And I was lucky enough to go there this January, during my 2-week vacation in the Hawaiian Islands.  (Side note:  If you ever get the chance to go to Hawaii, TAKE IT!)   This beach isn’t easy to get to, as it’s about two and a half miles from the dirt parking lot.  Your choices are a “shuttle” which is actually an old van or pick-up truck for $15, or a good 45 minute walk.  Both choices leave you dusty and thirsty, as you make your way towards an amazing oasis. 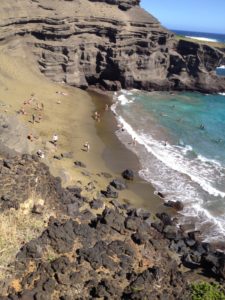 Why is the sand GREEN?  Well, the answer lies under the crust of the Earth, in the upper mantle, where one of the dominant rocks is Peridotite.  The name may remind you of August’s birthstone, Peridot, whose color is a yellowish to brownish green.  Peridotite is brought to the surface on the waves of magma that erupt from the same volcanos that formed the Hawaiian Islands.  It’s made primarily of the mineral, Olivine, which has a much higher melting temperature than most minerals.  So, the magma brings it to the surface, surrounds it with lava rock (basalt), but doesn’t melt it into the mixture.  These peridotite xenoliths eventually reveal themselves as erosion breaks down the basalt host rock.

What happens next is what happens to every rock, given time and exposure to the elements.  The peridotite breaks into smaller and smaller pieces, until it’s a bunch of tiny olivine grains.  But these little grains are heavier than most sand, so if the conditions are protected enough, they have a tendency to stay.  And if enough of them stay in one place, it makes the beach look green.  Conditions are rarely as perfect as here in this bay, cut by the ocean into the side of a former cinder cone.

So, how does it feel to play on a beach of green gems?  The truth is, most peridotite is not gem quality, and grains of sand are way too small to be valuable.  But there is something special, at least to this gemologist, about having tiny peridot between your toes.   It was great building a sand castle out of what the Hawaiians call their Hawaiian Diamonds.

The sand is protected by the state, so you’re not allowed to fill a container with it unless you are a native Hawaiian.  But, wouldn’t you know, the driver of my shuttle was a twelfth generation Hawaiian, and he was trying to impress the young, pretty woman sitting next to him.  He gave her a handful of green sand, mixed with larger peridot pebbles, in an empty water bottle.  When she showed them to me, I gasped in delight.  “Oh, my gosh!” I exclaimed.  “They’re beautiful!!”

When she found out I worked with gemstones, she secretly gave me the water bottle, saying, “You’ll appreciate it so much more than I will.”  So, I have my special little stash of green sand which I will keep forever! 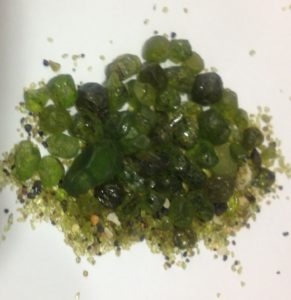 Hawaiian Diamonds (aka The Tears of Pele–Goddess of Volcanos)