What IS It About Sapphires? 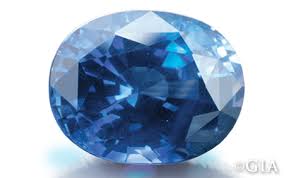 Many of us know that Sapphire is the September birthstone.  It’s also the precious gem suggested for the 5th and 45th wedding anniversaries.  But, what IS it about sapphires that makes them so special?  Considered one of the four most precious gems–the others being ruby, emerald, and diamond–sapphires have been prized since ancient times.

If you think of sapphires in chemical terms, Al2O3, they don’t seem like much.  Aluminum and oxygen are two of the most common elements on Earth.  Even the trace elements, iron and titanium, the ones that make sapphire blue, are not exactly precious.  Sapphires form in coarsely-grained igneous rock in many places such as Brazil, Tanzania, Sri Lanka, Thailand and Australia.  They don’t seem like the gemstone of royalty.

It is true that sapphires require the exact combination of elements and  slow-cooling temperatures are a must.  Mining these gemstones isn’t easy.  And there are few hues as beautiful as the cornflower blue of a fine sapphire.  But part of sapphires’ prestige is the deeper meanings attached to it over the centuries.

When you read reports on all that sapphires symbolize, it gets very confusing.  How can one stone represent seemingly every good thing in the world?  The skeptic in me starts to wonder–but, in my desire to be open-minded, I’ve come up with a theory.

In Biblical times, the blue color of sapphire symbolized heaven or a call for heavenly blessings.  Maybe because religion and mysticism were such a big part of life in those times, anything “celestial” signified hope and faith.  The sapphire represented a seeking of spiritual truth.  Royal and holy men believed the stone brought them the gift of prophecy and divine favor.

From there, people began to think the sapphires could help them see truths of all kinds.  It was a stone of wisdom, intuition, and mental clarity.  With clear vision in hand, one can accomplish many of the major goals in life.  So the sapphire was seen as the stone of love, peace, and joy.  It could relieve depression and ease anxiety.

Given all the amazing things that sapphires can bring, everyone should own one!  Especially if you’re born in September.  Regardless of whether you believe in the spiritual gifts of this gemstone, sapphires are one of nature’s gifts to us.